While writing the Primavera article I was wondering whether being in an exhibition like Primavera would lead to other possibilities. Was it a foot in the door? Or the end of the line? Did it give the women included a leg up in the art world, or was that only the case for the male artists? To assess some of this I went back the Art and Australia publication Current, as I remembered thinking at the time it came out that some of the younger artists were those that had just been in Primavera.

One of things I like about Current is that it presents Australian artists along side those from New Zealand. For me, this inclusion acknowledges trans-Tasman dialogues, influences and migration. Current also featured the work of several Aboriginal and Maori artists with a diverse range of practices. Despite these positive attributes, the poor representation of women is disappointing.

Please note: The 4 artist in the Kingpins are listed individually, but will be counted as 1 in the following statistics.

If you look then at the ages group that are eligible for Primavera, or in an emerging category, 5 out of 8 female artists have been in Primavera and 8 out of 16 men. In the emerging category we can see that the Primavera would be a contributing factor for inclusion, particularly for women, but becomes less important as artist head into the mid-career zone.

The Primavera exhibitions that women participated in are 1992 then, after a large gap, to '03, with proceeding artists from '04, '07 and '08 exhibitions included. For men the spread is longer starting again with 1992 then '95, '96, '99, '01, '03, '04, '06, '07, '08 exhibitions represented through the choice of male artists. This, then, either indicates that Primavera leads onto more opportunities for men and/or that the kudos of being including in Primavera lasts longer for men than women.

After considering the Primavera information, the second thing I noticed was that there is an incredible age gap in the women included. Like Countesses findings for the Venice selection,  there is a real drop off in women in that 40’s age group - that of the “mid-career artist”. Of course, Current can hardly be considered a good source, given that it had such an overall poor representation of women, but it nonetheless interesting that it is the mid-career, rather than later or emerging artist that disappears from the sample.

So what else does Current tell us about the biases that might have been part of selection criteria, which might indicated why women are poorly represented. As John MacDonald pointed out in his negative review of the book, the choices for inclusion were developed by several committees; there was an Indigenous round table, as well as Art and Australia’s usual editorial board that was augmented by Justin Paton, Max Delaney and Victoria Lynn and Nick Waterlow OAM. As with any decision made by a committee, there would have been a fair amount of comprise, and there must have been many very good artists who just missed out on the cut. So the question here is what were some of the deciding factors that might have formed the decisions and cuts.

The sample of the eighty artists chosen is relatively small given their participation in the art world as a whole. And as the number of women artists are within that sample even lower (28%), I don’t suggest that these findings can be extrapolated out to the rest of the art world. However, what these findings indicate is that the path to success for men is wider and more diverse than women. 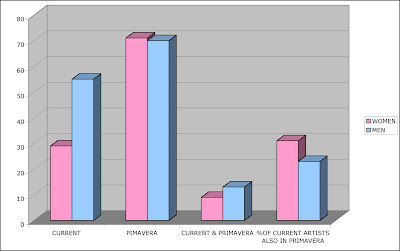 GRAPH OF GENDER REPRESENTATION IN CURRENT AND PRIMAVERA
[click to enlarge]


So what are the trends?

If you are a women you will most likely be born after 1960 (49) and before 1950 (59): You will have had a feature article or review of your work in Art and Australia. You will currently use or have used photography as your chosen media, or one of your chosen media. Out of a possible 18 galleries, Roslyn Oxely9, Anna Schwartz or Arc One will represent you. In addition to your gallery in Australia you might also be represented overseas.

Or
If you are a woman born after 1970: You probably have had review of your work in Art and Australia. You will work across media, probably working with new media, or making paintings. You have probably been in Primavera from 2003 to 2007. Out of a possible 9 galleries, you will show with Kaliman, Ivan Anthony, Gallery Barry Keldouis or Karen Woodbury.

Men, age is no barrier to your success whether you are in your 20’s or 60’s

If you are older than the median age of 41 (born 1967): You will have had a feature article or review of your work in Art and Australia. You will produce paintings or sculptures and installations. Out of a possible 26 galleries, Darren Knight, Hamish McKay, Kaliman, Anna Schwartz, Brook Gifford, Peter McLeavy or Tolarno will represent you. In addition to your gallery in Australia and/ or New Zealand you might also be represented overseas.


If you are younger than the median age of 41: You will have had a feature article or review of your work in Art and Australia. You will make painting, sculptures, and/or video installations. You might have been in a Primavera. Out of a possible 22 galleries, Roslyn Oxely9, Kaliman, Anna Schwartz or Uplands will represent you. In addition to your gallery in Australia you might also be represented overseas.