After counting the last three years of Broadsheet, I found that images by women make up 15% of the total and the discussion of women in the content varied from 25 to 32%, depending on the type of article. Was the low representation of women a case of omission by focussing on other issues?

Broadsheet in recent years has had an increased focus on the Asian region. The majority of these articles in the 3-year sample, particularly those from China and Japan, featured the work of male artists. I asked myself whether this focus was contributing to the low representation of women artists in the magazine. However it seems that when you break down the numbers of articles by year, the statistic of women’s work in the illustrations follows those of the overall sample. For example in the 2006, the year of the lowest number of Asian articles, there was a corresponding low number of women’s images in the total. For the three years of the sample, feature articles on women’s work never gets above 3 per year, no matter the number of Asian articles. The only thing that changes there is the ratio to features on male artists. 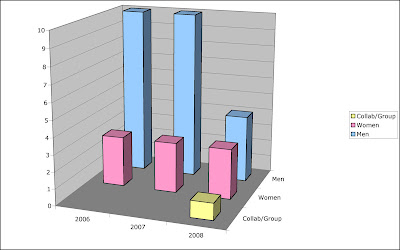 
So while the focus on Asia may be a contributing factor, it is not the main, or only factor that lowers the representation of women in general. Interestingly, it was also the Asian region where the most feminist-focussed articles originated (e.g. Nge, vol.37 no.1; and Ingham and Dirgantoro vol.36 no.1) Additionally, there are several women writers in the region to have regularly contributed in the last three year such as Biljana Ciric and Wulandani Dirgantoro.

In only counting the last three years I asked myself whether there would have been a greater representation of women in Volumes 34 (2005) and 33 (2004) given there where more women work on the covers in these years. In the years I counted (2006-2008) there were 4 issues with women’s work on the cover. The average statistic of photographs of work by women inside these issues was 12.8% compared with 15% as the percentage in the 3-years. In only one issue, did the percentage rise above the average to 19.3% and in two issues the percentage was as low as 8.6%. 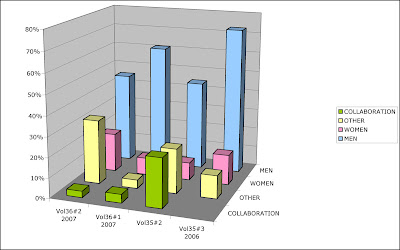 Percentage of images from Broadsheet issues in 2006-07 with a women’s work on the cover. [click to enlarge]

What this suggests is that cover is no indicator of contents - if a woman’s work is on the cover there is no need to put women work on the inside. So even though volumes 34 and 33 had more female artist's work on the covers, there may have not been any greater representation of their work inside and therefore no better representation of women’s work in those preceding years not counted in the survey.

I then began to question whether the lower coverage of women work was due to potentially lower numbers in the exhibitions reviewed. The Sydney Biennales of 2008 and 2006 offer a useful test case given the large difference in gender representation in each exhibition. Additionally, as there where a number of articles on this exhibition I am not singling out any one writer for criticism. The 2008 Biennale had 25% women in the exhibition. The percentage of female artists mentioned in these interviews was 25% compared with 70% male. These percentages seem to reflect the representation of women in that exhibition. However, for the coverage of 2006 BOS where women made up 50% equal to that of the male representation, this trend was not repeated; the trend repeated was that of an underrepresentation of women in media coverage. In this year women made up only 36% of the media coverage compared to 62% of male artists. 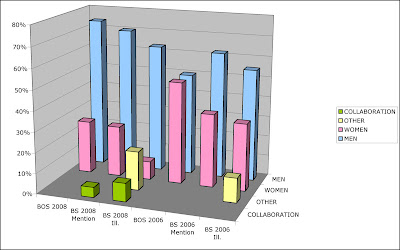 Biennale of Sydney 2006-08, Articles that mention artists and Illustrations to articles [click to enlarge]

This statistic of women making up a third of the coverage in 2006 BOS reviews is similar to the general statics over the 3-year sample. At this point it would interesting to see if this one-third media coverage is reflected in other magazines and other exhibitions, so watch this space. However, while the work of women is mentioned half as often in reviews, in Broadsheet, 32.2% compared with male 62.3%; the images chosen to illustrate these articles is more often the work of men 71.6% compare with 19.6% women. So who is making the picture and article selection? What checks and balances are there in place to address the low number of women present?

The majority of images in Broadsheet contain a person, either as portraits of an interviewee, news images that included people or artworks that show the artist or another person (regardless of gender) in the work. Performance artists and new media artists who have images of themselves in their own work are the artists best represented across the three-year sample. Is it in part due to the black and white printing of the magazine and that perhaps an image of a person holds a fascination which transcends the reduce format?

I do not have enough information on the processes of writing and formatting of Broadsheet to answer definitively. Do writers request their articles to be illustrated by certain works? Are institutions or individual artists not supplying enough quality images for there to be a better cross-section? What power or influence does the advisory board have in deciding what gets reviewed and written? Alan Cruickshank is both the editor and designer of Broadsheet. No matter what the external factors are preventing the inclusion of women, certainly the final responsibility would lie with him.

Whatever the reason for Cruickshank's personal preference for images including people by male artists, the overwhelming sensation of reading three years worth of Broadsheet in a few weeks (ok- I scanned some of the articles) was that the presentation of the role of the artist is that of a Man of Action. By this I mean that Broadsheet preferences work by artists wherein artist subjectivity — and by extension here, male artist subjectivity — was central to the formation and enacting of their work. Perhaps this merely reflects Broadsheet's interest in process-based practices, albeit a very limited exploration, ignoring those artists who use graphic and sculptural forms. I started to wonder whether this was some essential gender difference between male artist and female artists, with men more readily take up the role of the visible maker and protagonist of action. However, to accept this argument felt like ignoring the many interesting and radicalising works by women over the 100 plus years of the feminist movement that questioned and opened up the role of artists and the categories of art.

It seems to me that Broadsheet is interested in promoting work that provides some sort of social criticism and/or work they perceive as 'avant-garde' and transgressive. Further, that Broadsheet sees itself promoting Australian and Asian artists in a potential gap in the international tradition of the avant-garde. Nothing much wrong with that you might say except the question of why are they mostly promoting male artists?

Perhaps by focussing so narrowly on male artists who use the human form in some way in their performance/new media practice, Broadsheet have unwittingly created a canon of this kind of work i.e. a tradition. I contend that the model of the artist within this tradition, created and perpetuated through the number of articles and images focusing on this work, is too closely aligned to that of the Artist as Hero- a form as limiting to male artists as it is to the women generally excluded from it.

What is the explanation then for why men’s work is considered more closely connected to the larger questions of Australia and contemporary society that are addressed in 'Opinion' articles. Does a Woman of Action have a connotation that is old fashion (we did it in the 1970’s) or somehow not useful to these writers? Or it simply, as one commentator put it, mainstream culture is male culture - and that Broadsheet has no interest in questioning that.

Posted by count.esses(at)gmail.com at 4:36 PM 9 comments: