In September 2008 the Countesses posted an article about the number of female artists appearing in the latest issue of Broadsheet. As an anonymous commenter, I suggested that the sample was not big enough to get a good idea of whether the CoUNTess @blogspot's findings were indicative of Broadsheet's average. Fred Friendly also commented that there should also be some qualitative, or quantitive measure to the calculation, as the Countesses had counted each name giving it the same value. I decided to survey the last 3 years to get a bigger picture.

In order to try and introduce some quantitive measure without counting column inches, I have broken the articles in types: Review, Opinion, Feature, Text, Interview, Book Review, Round Table. The statistics for each category are listed separately below. As Broadsheet is a magazine that is responding to exhibitions, general world news and art events such as conferences, many of its articles are in some way a “review”. I have created these categories in order to give a sense of the amount of discussion.

The general statics are: images by women make up 15% of the total and in the content, number of feature articles or mentions in reviews etc, varies from 25 to 32% depending on the category. Below are the statics for content broken up by category with additional graphs of the photos used to illustrate each. 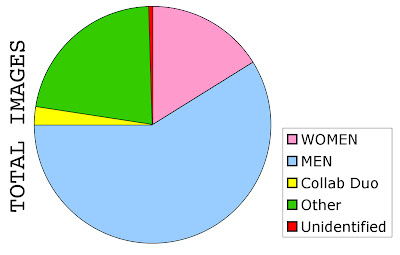 TOTAL IMAGES
Images of artworks from before 1900 are counted as “other”. Examples of images from this category are: covers of books, portraits of interviewees, photographs of locations and news images.

It is Broadsheet's “review and opinion” or responsive nature, to both exhibitions and world news and their possible implications for visual culture, which gives the publication its flavour, and differentiates it from other magazines. While what follows could be read as a criticism of the magazine, it in no way suggests that Broadsheet should change its mix or focus. The questions arise more as: What are the qualities of art by men which make it more readily referential to world events and theoretical texts, and hence used to illustrate Broadsheet's articles? What are the conditions of production and display that are being reflected in Broadsheet? Why do these conditions favour men? These questions will be fleshed out in a second post.

The first and easiest part - the covers: 7 men, 4 women, and 1 collaborative duo. However over a 5 year period this becomes almost even with 9 male, 8 female, 1 collaborative duo, 1 group and 1 “other” image (photo by Kim Machan, curator MAAP Singapore, 2004) The question of whether the cover is indicative of the contents I will return to in the next post.

TOTAL FEATURES: A “Feature” is an article that discusses the work of one or, at most, two artists/collaborative duos/groups. It may take an interview format. If the writer makes a reference to another artist in creating context for the featured artist, this is not counted. (Although a statistic on the number and types of references would be interesting.)

OPINION : An “opinion” article is one where the majority of an article is given over to the discussion of a theme, issue or concern. For example: a discussion of the re-sale royalty; a review of the Asia Pacific Triennial where 5 columns of the 7 column article is spent discussing Brisbane’s new museums; a review of a biennale that focuses solely on critiquing the curators theme or biennales in general; a reportage of the protests during the Sydney APEC gathering. Usually the references to artworks and artists in these articles are shorter. In this case all artists mentioned (often in a list) are counted as the writer is often expecting the reader to already have some knowledge of their work.

REVIEW: A “review” is an article where the whole, or nearly all, of the article is given to discussing the work in an exhibition. In these, artists’ work is generally given some word length and not listed (although not all cases). In a “review” artists are only counted if there work is under discussion, if the writer makes a reference to another artist this reference is not counted eg. “With artist like Chris Burden, Marina Abramovic and Ulay as exemplars, Schwensen’s twenty–four hour on the scales…” (Phillips; vol 36, no.1) counted as 1-male (Schwensen).

These statics raise two questions: Are the numbers of female artist included in reviews reflective of the number of women in exhibitions generally? Why is it that women make up 32.2% of the content but only 19.6% of the images? These questions I will return to in my second post.

Method
Individual artists were only counted once in each article. Curators, directors, writers, architects and musicians (except when discussed as art practice e.g. Cook; Who Plays Music: Six Interviews; Vol 37 no.3) where not counted.

Artists active before 1900 are not counted.
Posted by count.esses(at)gmail.com at 6:20 PM