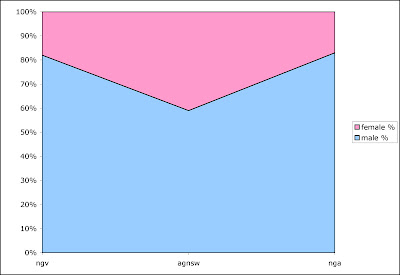 At the end of the day, these collections write the art histories of today and tomorrow, a purchase or donation of an artist's work into a museum collection increases its market value and its chances of being shown in public in the future. A museum or comparable private collection (or private museum) is the top of the success pile for artists. So, where do museums and private collectors buy their art - that will be in commercial galleries. Stay tuned, CoUNTess will examine the gender breakdown in Australia's commercial galleries.
Posted by count.esses(at)gmail.com at 3:11 PM 8 comments: