As CoUNTess is about to jet off to see the continent this year, We thought We’d do a bit of homework about what We might expect to see.

First stop on our itinerary will be Venice to see the 55th International Venice Biennalehttps://universes.art/venice-biennale/2013/, so We checked the list of exhibiting artists and of course We had to do a bit of CoUNTing since that’s what We do.

Apart from each participating country having its own pavilion in the Giardini, the main exhibition is a huge international show and the major part of the Biennale this year it is curated by Massimilliano Gioni and is titled The Encyclopedic Palace.

Included in the exhibition are 36 female artists and 104 male artists as well as 11 collaborations or groups. 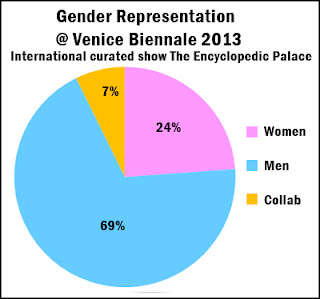 Shock! Horror! Or maybe on second thoughts, it’s not really surprising since it's almost typical of gender balances that We see a lot of here in Australia, if not slightly worse.

We noted that there are no Australian artists in this important curated exhibition while the Australian Pavilion will show the work of Simryn Gill.

When those figures are put into percentages, We find that the exhibition showcases the work of 69% male artists and only 24% female artists. Surprisingly the international exhibition lists almost the same percentages as all of the individual country’s pavilions when they were counted. Out of 31 countries that will show solo artists 74% solo artists will be male and 26% will be female. Assuming all of these countries have similar ratios of artists in general and art school graduate ratios as Australia has, (35% male grads and 65% female grads) a male artist will have above 5 times more chance of showing at the Venice Biennale than a female artist. 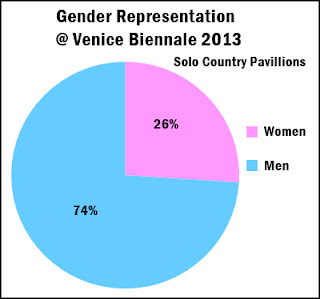 These Venice Biennale figures are even worse than the gender biases seen in recent Australian exhibitions such as the past few Sydney Biennales. We pondered this for a while and wondered if the reason could be that in Europe there is not as much emphasis on gender balancing as there is in Australia. We suspect that in Australia, there might be an agenda by the curators and organizations to be mindful about showing both male and female artists equally. This appears not to be the case in Italy.

Curators of biennales are expected to show the best and most interesting art that they can find around the world. There is often a theme to these shows that determines selection, so the selection is not just the best art but the art that fits the theme. Often these themes can slide into being politically correct and predictable, and We don’t like the idea of curators having to have gender balance as an enforced politically correct agenda, but We do feel that without awareness of the balance a curator will have inbuilt biases towards male artists.

Posted by count.esses(at)gmail.com at 9:05 PM 2 comments: