Out for the count 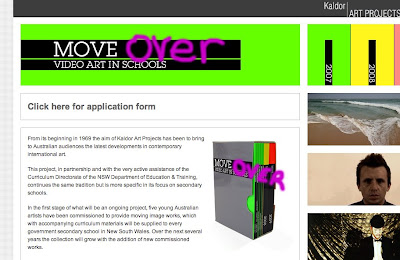 CoUNTess is here and we have been doing some overdue statistical research, confirming what many have been — too quietly — discussing: the systematic gender inequality in the art world. The art world is global, but we thought we would start local, even regional, in the quest to examine the truth behind the serious representational gender inequality that is currently present at every level of the art training-production-marketing-consuming system.

CoUNTess awaits with anticipation Art Express 2009, but in the meantime has been wondering which artists high school students are being exposed to in the class room. We have discovered an initiative by the Kaldor Art Projects, who have produced in partnership with the Curriculum Directorate of the NSW Department of Education and Training, a DVD resource for high school students called MOVE: Video Art in Schools. The aim of the resource is to acquaint and inspire students with the new art form of VIDEO, which is a fine ambition, but...

Can someone at either of these organisations explain to CoUNTess why all the "commissioned" artists in this high school resource are men? Considering that no less than half of visual art students in high school are women, CoUNTess thinks it obvious that such resources would champion gender equality and strongly encourages them to do so.

CoUNTess would be happy to get in on this exclusive Kaldor partnership in the future to fix this glaring problem. I propose that our revised resource be titled MOVE OVER: you don't have to be male to make video art. CoUNTess has a vast network of fabulous women video artists which may assist in its production; we understand the organisers of these kind of resources might have trouble finding many women artists to choose from due to the scarcity of women artists in Australia's commercial galleries and public spaces. Encouraged by us to look beyond these institutions and their testosterone-sodden catalogues, they will find, as we at CoUNTess have (and as many women artists are achingly aware of), that the nation's art schools by comparison are overflowing with women artists.*

CoUNTess also couldn't help but notice that the commissioned artists in the Kaldor resource are all represented by commercial galleries and that these galleries have their own gender inequality issues! That's a lot to think about! Here's the commercial galleries who 'supplied' artists to MOVE Video Art in Schools and their gender spread: Anna Schwartz (23men/15 women), Rosyln Oxley9 (17 men/22 women), Barry Keldoulis (13 men/7 women), Grant Pirrie (10 men/5 women). As we continue to pour over the commercial gallery statistics and their conspicuous alignment with gender inequality in the art world at large, we at CoUNTESS are very much looking forward to weighing in. Why should mens art be worth more than women's?

* These numbers will be crunched in future posts, as we search for the location of the glass ceiling. This discussion will include 'bonus' findings on inequality in the academy, such at the fact that women make-up the majority of art students and the minority of teaching/research staff.
Posted by count.esses(at)gmail.com at 7:48 PM 1 comment: