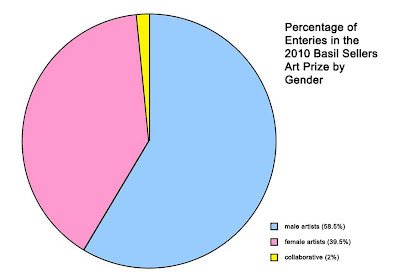 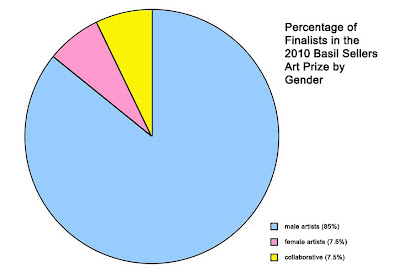 Posted by count.esses(at)gmail.com at 5:29 PM

That is Off woman! They are a disgrace to the equal rights lobby. Sanctions need to be implemented, does anyone care? Are there any politicians out there we can lobby? Tanya Plibersek was supposrtive of former art's lobbies. So depressing.

this is a pretty sad outcome. it is like it is saying that the womens work was just not good enough which i just don't believe is possible. but thats what this kind of outcome reinforces, women just don't make good enough work to be selected for a 100,000 prize or that men are so naturally connected to sport?

it is such a stereotype. shame on those judges and the prize for allowing this to happen and the ian potter and melbourne university

the judges and the prize can chose whoever they like it is about the best art isn't it?

very unsporting and downright unaustralian if you ask me

Dear CoUNTesses,
Keep counting. I wonder if you have thought about doing stats on new publications such as Current, Beep...crackle by Stuart Koop and Blair French and Daniel Palmer's Twelve Australian Photo Artists? Good to read Melissa Miles' account in Art Monthly especially in light of disavowal/discomfort with feminism in current Art & Australia. Let's keep the dialogue alive.
Natalie King

shocked but not surprised said...

I think the Basil Sellers art prize message is that women are basically the spectators in the sport scenario so couldn't possibly have anything genuine to contribute as they are not really interested in that anyway, its about sport and sport is predominantly about men. But even the AFL website claims " The AFL is committed towards providing information and pathways for women and girls to be involved in the great game of Australian football" which is more than the Basil Sellers Art Prize and its associated institutions can claim

Gaaaawwwdd.
Makes you just wanna give up completely.
It's as if feminism NEVER happened.

this kind of outcome shows the obvious agenda of the prize being about worshipping sport. Sport is such a huge part of a mans life even if they position themselves outside of it they are forced culturally to have some kind of relationship to it. Where I have met many women who claim they are just not interested and quite frankly I believe them.

Sure Anonymous, the judges can choose whoever they (or is it you) like...this discussion is about what these choices reflects about the judges' attitudes, and sadly what is revealed lends the prize an unsavoury macho flavour.

What amazes me about the poor representation of women in the forthcoming Sellers Prize is that there were two female curators on that selection panel. really, they should be ashamed of themselves. Just goes to show it's a complex set of circumstances that leads to the entrenched inequity that is being discussed here.

The Basil Sellers heralds a new low point for Australian Art, not only because of the current line up being skewed towards male artists (and young attractive female artists wearing bathing suits); but also because it is such a potent example of the museum dictating the content of the work they present as artists are increasingly marching to the tune of the latest creative fundraising concept of a curator.

As the previous Basil Sellers exhibition attested, it is a recipe for bad art.

hey countess - this time the girls took the 2010 prize - can't help but wonder if yr counting had some influence.
BTW - Piper Press has a deliberate policy of publishing monographs of women artists.

what's new? when do we use the numbers to start developing strategies to address the imbalance?
i would love to be part of a group prepared to work on this.